Ep. 8: The Women Who Would Be President

We just lived through the first election in which a woman won the nomination of a major political party to be President of the United States and came close to being elected. To many, this was a sign of major progress . In fact, there are more women today in American government than ever before. But despite the fact that women have had the right to vote for almost a century and the fact that they consist of half of the country’s population, no woman has ever served as President of the United States.

But that doesn’t mean that no woman has ever tried. In fact, many actually have. When Hillary Clinton announced her runs for the presidency in 2008 and 2016, many people discussed the topic of a woman president—what it could mean and how it might play out. But I noticed that few, including those who hoped for a woman president, knew much about the history of women running for President or even knew their names. So, I decided to investigate. Since 1872, there are have been several dozen women who have run, almost all of them long shots with little chance of winning; but that doesn’t mean they weren’t important or interesting. And many of them achieved other firsts in American history. If so many people want a woman president, isn’t it worth knowing the story of how we got to where we are today?

This episode is not a comprehensive history of every woman candidate, but it will focus on those who made the biggest strides to put a woman in the White House: Victoria Woodhull, Margaret Chase Smith, Shirley Chisholm, and Edith Wilson. They were all strong-willed individuals who faced ridicule and resistance. And most of them, by virtue of their background, were unlikely figures in the annals of American history. Their stories—and their dream to attain the nation’s highest office—are the subjects of this episode of This American President: The Women Who Would be President. 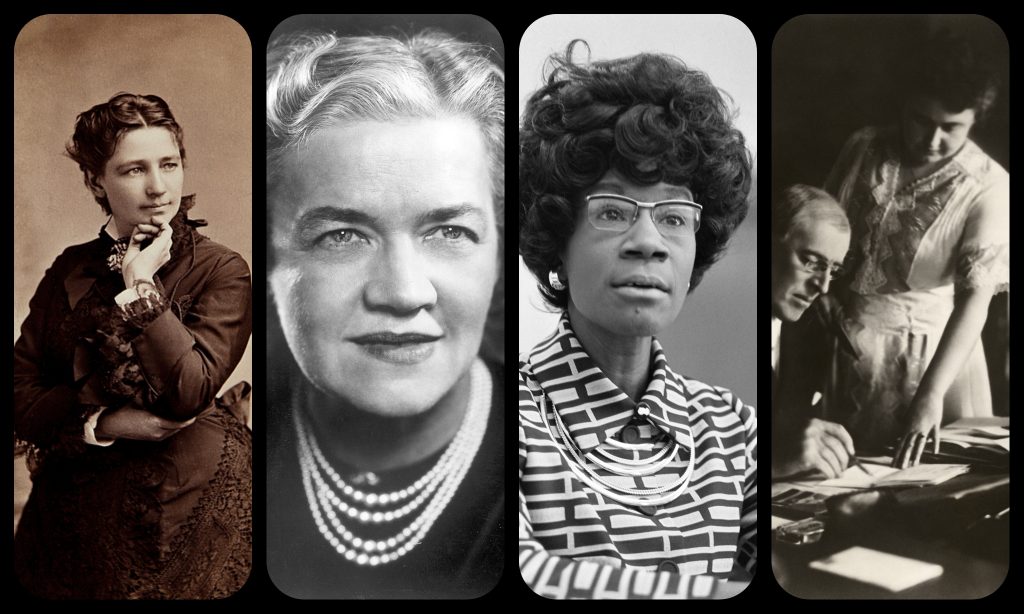 The subjects of this episode, from left: Victoria Woodhull, Margaret Chase Smith, Shirley Chisholm, and Edith Wilson (with President Wilson).

If you want to learn more about important women in American history, we recommend that you check out the National Women’s History Museum at womenshistory.org. Their goal is to build a world-class museum on the national mall in Washington, D.C. They are working to raise awareness and honor women’s diverse experiences and achievements through their online museum, educational programs, scholarship and research. Once it’s built, the museum will be the first in any nation’s capital to showcase the full scope of the history of the country’s women. I’m looking forward to one day seeing the museum finished and learning more about women like Victoria, Margaret, Shirley, and Edith and their impact on our country.

If you want to learn more about today’s episode, check out Woodrow and Edith Wilson by Ruth Ashby, Madam President by William Hazelgrove, Highest Glass Ceiling by Ellen Fitzpatrick, Breakthrough by Nancy L Cohen, and Scarlett Sisters by Myra Macpherson.

We want give a special thanks the women who provided the voices for this episode: Emily Carr as Victoria Woodhull, Margaret Bradley as Margaret Chase Smith, Joanne Skerrett as Shirley Chisholm, and Gio Lynch as Edith Wilson.

We also want to thank our Patreon supporters. You too can support us by going to www.patreon.com/thisamericanpresident and giving a small amount per episode we release.